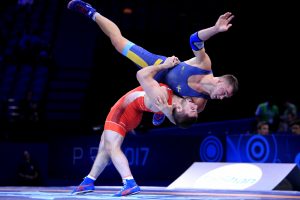 Discovery-owned Eurosport has struck a partnership with United World Wrestling that will see World Championship and European Championship wrestling brought to Eurosport viewers between now and 2020. The pair will also launch a TV and digital campaign to support Eurosport’s coverage in the lead up to the Tokyo 2020 Championship.

The agreement, which runs until 2020, will see Eurosport showcase the World Championships and European Championships across Europe in 54 countries and territories and 16 countries in the Asia-Pacific region on linear, online and Eurosport Player.

Following today’s partnership announcement with UWW, Eurosport has now committed to showing screening 26 of the 33 sports set to feature in Tokyo 2020 on its various platforms – linear, online and Eurosport Player – across its network.

Laurent Prud’homme, Eurosport SVP, rights acquisitions and syndication, said: “We want to emphasise that sports such as wrestling are more than a series of events that only takes place at the Olympics. This partnership strengthens Eurosport’s ambition to tell year-round stories of current and future Olympians. Securing an agreement with the UWW will allow fans across Europe and the Asia-Pacific to follow their heroes in the lead-up to Tokyo. Equally, this also gives us the opportunity to educate sports fans who perhaps don’t know too much about wrestling.”

Nenad Lalovic, president of United World Wrestling, said: “We look forward to continuing our partnership with Eurosport and improving the level of exposure across Europe. We believe this partnership took a significant step forward last year during the successful World Championships in Paris and look to build on that for our major Championships and in the lead up to Tokyo 2020.”