Ahead of the #ForbiddenDoor clash for the @AEW Interim World Championship, 2 men who’ve looked to fight each other for a long time
@JonMoxley + @tanahashi1_100 will come face-to-face TOMORROW on Wednesday Night #AEWDynamite!
#RoadRager Live tomorrow on
@TBSNetwork @ 8pm ET/7pm CT https://t.co/aKx3LVPpxo 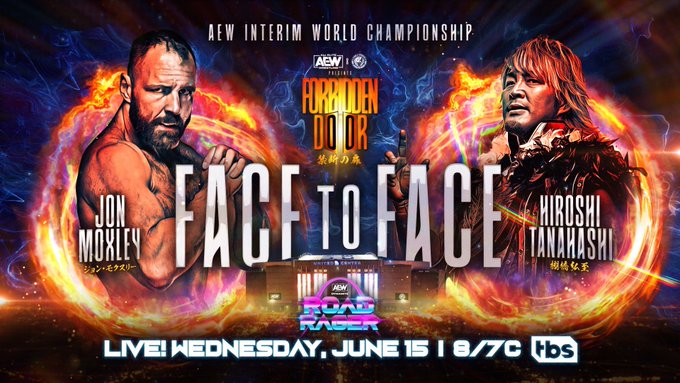 Hiroshi Tanahashi will face Moxley for the Interim AEW World Championship at “Forbidden Door”. Tanahashi had defeated Hirooki Goto at the  NJPW “Dominion” Pay-Per-View, to earn the title match.

As noted, the original AEW World Heavyweight Title match was also supposed to involve Tanahashi, however, Punk suffered a foot injury and recently underwent successful surgery, so while he is on the sidelines, AEW will determine an Interim Champion to take his place.

Below is the updated lineup for tomorrow’s AEW Dynamite: Road Rager episode:

Dax Harwood vs. Will Ospreay

Wardlow vs. 20 security guards in a handicap elimination match