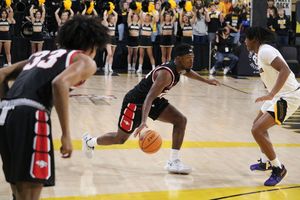 MILWAUKEE, Wis (11/14/2022) — The Cardinal Stritch University Men’s Basketball team lost on the road against NCAA Division 1 UW-Milwaukee Panthers at UWM Panther Arena this past weekend. The Wolves had a tough start with the Panthers going on a quick run spurred by multiple personal fouls on the Wolves, putting the Panthers in the bonus with 16 minutes of play left in the first half, eventually leading to UWM shooting 23 free throws solely in the first half. The Panthers also shot 47% from the field in the first half. At halftime, the Panthers led the Wolves 54-17. The Wolves cut back on the fouls drastically in the second half, however with the Panthers shooting 50% from the field for the game it was tough for the Wolves to go on a run. The Wolves were able to get shots off, but they could not find the bottom of the net, shooting just 25% from the field. The Wolves put up a battle until the very end but eventually fell short, which led to a final score of 112-38. Damar Reed (Milwaukee, Wis.) led the Wolves in scoring with 15 points, and Aris Duni (Thessaloniki, Greece) led the Pack in rebounds with 6.

The Wolves are back at it Tuesday, November 15 on the road against the Mustangs of Mount Mercy University at the Hennessey Rec Center in Cedar Rapids, Iowa. Tip-off is scheduled for 6 PM.