Despite an apparent rift between himself and AAA and the inability to work AEWxNJPW Forbidden Door due to wrestling politics, it’s still good to be Andrade El Idolo right now. His best buddy Rush has joined him in AEW, he recently married long-time girlfriend, WWE star Charlotte Flair, and now Charlotte will be hanging out with him in St. Louis, the site of tonight’s “AEW Dynamite.”

The latter fact was confirmed yesterday when Andrade posted a photo of himself and Charlotte on a plane, flying into the site of AEW’s next show. 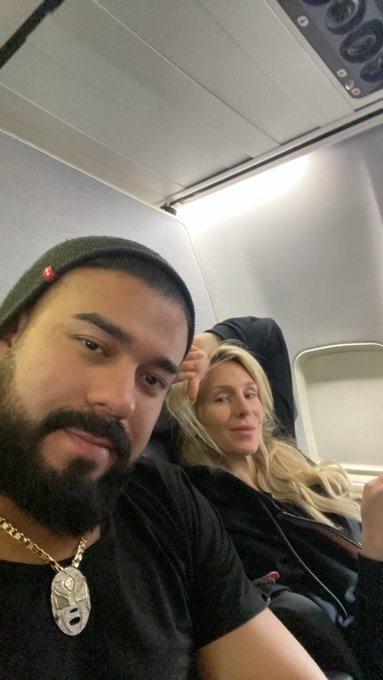 As of this writing, Andrade isn’t scheduled for “AEW Dynamite”, though that doesn’t preclude him from appearing on the program or potentially wrestling/appearing on “AEW Dark: Elevation” or “AEW Rampage”, which will both be taped tonight as well. The former CMLL, New Japan, and WWE star made his in-ring return to AEW last week after a nearly two month hiatus, during which he and Charlotte were married.

Charlotte’s presence backstage at “AEW Dynamite,” if she chooses not to stay in their hotel room, is notable given that she has yet to return to WWE TV following the conclusion of her and Andrade’s honeymoon. The former WWE SmackDown Women’s Champion was not at last week’s “SmackDown”, and there is no word on if she will appear on this Friday’s episode. Flair last appeared at WWE WrestleMania Backlash, where she lost the SmackDown Women’s Championship to Ronda Rousey in an I Quit Match.

Tonight’s “AEW Dynamite: Road Rager” episode is chock full, with Wardlow taking on 20 security guards represented by Mark Sterling, Toni Storm vs. Britt Baker in an Owen Hart Cup semi-final rematch, Dax Harwood vs. New Japan US Champion Will Ospreay, Chris Jericho vs. Ortiz in a hair vs. hair match, Ethan Page vs. Miro in an AEW All-Atlantic Championship qualifier and Jurassic Express vs. The Young Bucks in a ladder match for the AEW World Tag Team Championships.