One of the most celebrated in-ring performers of his generation and an eye-popping pro wrestling prospect will make their AEW in-ring debuts on tonight’s episode of “Rampage”.

New Japan Pro-Wrestling’s Will Ospreay will be in a trios match alongside Aussie Open against the Ring of Honor World Tag Team Champions FTR and Trent Beretta. Ospreay, Aussie Open, and their United Empire stablemate Aaron Henare attacked Beretta and FTR on Wednesday’s “Dynamite”.

Ospreay is a former IWGP World Heavyweight Champion in NJPW and is almost universally recognized as one of the best professional wrestlers in the world today. Ospreay is also the leader of NJPW’s United Empire stable, which added Aussie Open late last year. Kyle Fletcher and Mark Davis are rising stars in the world of tag team wrestling. They joined NJPW in April after building their reputations in Australia and Europe.

Tonight’s “Rampage” will also feature the in-ring debut of 7′ 4″ former professional basketball player Satnam Singh. He will appear in a tag team match alongside Jay Lethal. Singh first appeared in AEW on the April 13 episode of “Dynamite” when he helped Lethal and Sonjay Dutt attack Ring of Honor World Television Champion Samoa Joe.

Singh was drafted by the NBA’s Dallas Mavericks in 2015. However, he never played in the NBA. As a pro wrestling prospect, Singh was scouted by WWE and AEW before he decided to sign with AEW last fall.

Plus, Kris Statlander and Red Velvet will clash in a rematch of an Owen Hart Foundation Women’s Tournament match less than a month ago.

The following line-up is announced for tonight:

Stay tuned for more on tonight’s “Rampage” and be sure to join us for live coverage at 10 PM ET. 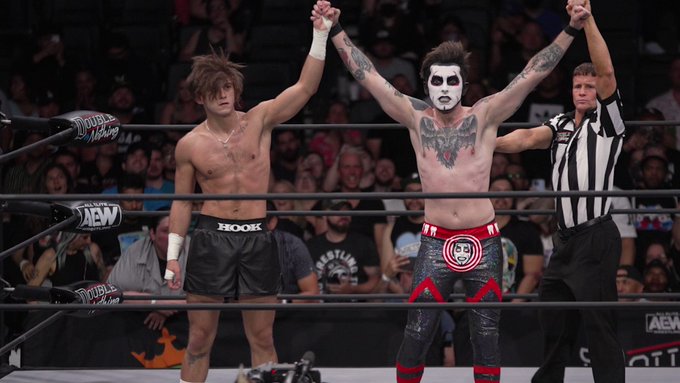