The top two guys at 182 pounds in the soon-to-be-released post-Fargo rankings are both new to this weight class. Brayden Thompson has been competing at 170 lbs since last year when he made his Who’s Number One debut. Since that time, he has stood out as one of the top recruits in the class of 2023 by qualifying for the U20 World Team, finishing 6th at the Senior US Open, and winning a loaded Powerade bracket at 172 lbs. Thompson will compete in the U20 World Championships later this month. 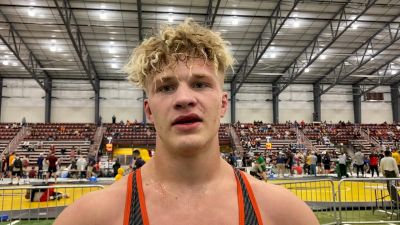 Zack Ryder was all the way down at 152 pounds less than a year ago where he finished 5th at Super 32. Ryder has been a top-ten wrestler since his freshman season, but his performance at the U 17 World Team Trials raised his stock even more. In that tournament, Ryder bested Fargo champs Gabe Arnold, Aeoden Sinclair, and Connor Mirasola which proved that he’s ready to compete at this much larger weight class. If his performance in Vegas wasn’t evidence enough, Ryder went on to earn a bronze medal at the U17 World Championships last week in Rome.

Thompson is one of the top recruits in the class of 2023, and he’s decided to take his talents to Oklahoma State where he projects as either a 174 or 184-pounder. Ryder is a highly coveted recruit in the class of 2024 and is entertaining all options in the early stages of his recruiting process.

Both Thompson and Ryder wrestle with a lot of power, are excellent hand-fighters, and are almost impossible to score on. When the two meet on September 9 in Ann Arbor, expect a physical battle resulting in a winner with a hard-earned #1 ranking.