Two of the nation’s top heavyweights are scheduled to renew their rivalry on Friday night in the most significant dual meet on the NCAA wrestling calendar. For #1 Penn State, this is a chance to prove that Kerkvliet’s 8-5 decision at the All-Star Classic was no fluke while #2 Iowa will look to re-establish Cassioppi as the better heavyweight in this rivalry, a distinction he had after winning his first three matches with Kerkvliet.

Cassioppi and Kerkvliet’s first college match occurred at the Big Ten Championships in 2021. Cassioppi won that contest by 9-0 major decision. A season ago, Cassioppi won a 7-2 decision during the Iowa vs Penn State dual but needed overtime to win their matchup in the Big Ten semifinals. Then, in November of 2022, Kerkvliet flipped the script with the 8-5 decision embedded above.

The significance of this heavyweight matchup cannot be overstated. Not only could the match be crucial for the team score, but it will also have major implications on heavyweight seeding for the Big Ten Championships and NCAAs. Last week, Kerkvliet list his first match of the season to Michigan’s Mason Parris. Cassioppi is currently 16-0 with ten falls and a 68.75% bonus rate. He’s scheduled to wrestle Mason Parris in a dual against Michigan on February 10.

Kerkvliet will likely take confidence from his last meeting against Cassioppi. After their All-Star Classic meeting, Kerkvliet told JD Rader, “This confirms that I’m on the right path, and maybe can step it up a little bit.” A victory over Cassioppi could keep Kerkvliet in the running for the top seed at Big Tens if Cassioppi earns a win over Mason Parris, something he’s yet to accomplish in three attempts. 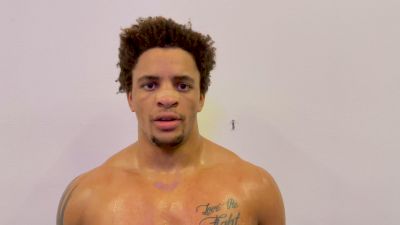 “I said there’s only one thing”

"I said there's only one thing"