Per Michael Rothstein and Tom Pelissero, the Falcons are trying out a few veterans and non-rookies at their rookie minicamp this week. 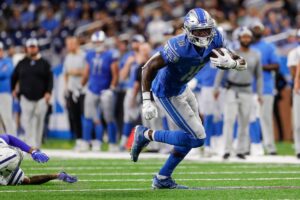 Allison, 28, wound up signing on with the Packers as an undrafted free agent out of Illinois back in 2016. He was unable to make the 53-man roster coming out of the preseason but was later signed to their practice squad and eventually promoted to their active roster after Green Bay sustained some injuries at receiver.

Allison re-signed with Green Bay as a restricted free agent in 2019 before departing for a one-year contract with the Lions. He opted out of the 2020 season due to the pandemic and was later brought back to the Lions practice squad in 2021.

In 2021, Allison appeared in all three games for the Lions and recorded no statistics.

Coon was a three-time NCAA All-American wrestler at Michigan and posted a record of 116-15 record during his college career.

Coon earned a spot on the men’s Olympic wrestling team earlier this year. However, he failed to qualify for the 2021 Olympic Games through the World Olympic Qualifier last month.

He was signed by the Titans in 2021 as a guard in training camp but was later cut after going on injured reserve.